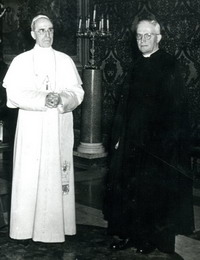 Fr. Isidore Perraud, CSSp, was born on 27 Oct. 1907 at Clisson, in the Diocese of Nantes (France). After his ordination as a priest in 1933, his superiors sent him as a missionary to Cameroun, French West Africa. From 1954 to 1960, Fr. Perraud was secretary at the apostolic delegation in Dakar.

His interest in the worldwide episcopate began in the mid 50s as a collection of unique material comprised of dates of consecrations, pictures, coats-of-arms, and biographies of Catholic bishops.  In 1955, he began publishing this research material in the almanac “l’Annuaire de l’Eglise Catholique” which he edited.

In 1969, Fr. Perraud returned to France, to the village of La Turballe, where he began to arrange this collection by continents and countries. In 1970 he brought his expertise to a group of historians who since 1969, as a group, had researched episcopal ordinations and apostolic succession.  Until 1991 the group’s research had been published in the periodical “Esprit et Vie” and Fr. Perraud served as co-editor of the published manuscripts.

From 1993 to the present, the documentation has been published in the journal “Revue des Ordinations Episcopales” edited by Charles Bransom.